Yesterday was full of great news for our publishing house, Univers partagés éditions: the English edition of Workaholic released officially on iBookStore, and we benefited from two new papers in the press (Nantes-Actu.info and Journal du Japon). That’s very exciting to see the enthusiasm among readers and people around us.

Now that Workaholic is available in English, we hope a wide range of readers will enjoy our eBook. In a few words: Workaholic is a one-shot comic-book that I wrote and which has been brilliantly illustrated by Rosalys. The French version has been released two weeks ago, and now the English version can be downloaded for free on the iBookStore. If you’re looking for a short manga to read on your iPad, feel free to download our story. 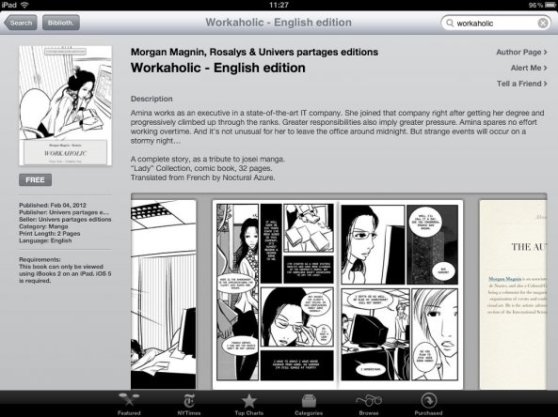 Workaholic has just been released in English on the iBookStore

The description of the book follows:

Amina works as an executive in a state-of-the-art IT company. She joined that company right after getting her degree and progressively climbed up through the ranks. Greater responsibilities also imply greater pressure. Amina spares no effort working overtime. And it’s not unusual for her to leave the office around midnight. But strange events will occur on a stormy night…

A complete story, as a tribute to josei manga.
“Lady” Collection, comic book, 32 pages.
Translated from French by Nocturnal Azure.